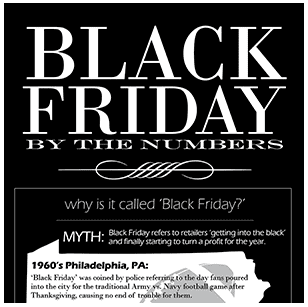 Black Friday By The Numbers [Infographic]

Why is it called Black Friday?

Common myth: The term Black Friday, stems from retailers using the day’s huge receipts as their opportunity to “get in the black” and become profitable for the year.

Reality: the name “Black Friday” dates back to Philadelphia in the mid-1960s, and the day following Thanksgiving and the traditional Army-Navy football game that’s played in Philadelphia on the following Saturday. The crowds in the city were great for retailers, but a huge pain for police, cab drivers and anyone who had to drive in the city.

The Philadelphia Police Department started referring to the annual day of commercial bedlam as “Black Friday” to reflect how irritating it was.

SO WHERE DID THE WHOLE “GET IN THE BLACK” STORY ORIGINATE?

Storeowners didn’t love having their biggest shopping day saddled with such a negative moniker, so in the early 1980s someone began floating the accounting angle to put a more positive spin on the big day.

How Do Companies Make Money Despite the Massive Deals They Offer?

Now, at the beginning of that product’s run, the store will sell an average of 10 of these TVs a day, for $10,000, and $5000 profit. But in today’s market, the lifespan on of a single piece of technology is remarkably low, and sales start to slow as new products are released.

In the eyes of the store, they are getting rid of a product whose sales were diminishing, offering great deals to the public, and making a tidy profit while they do it.

Cyber Monday, much like Black Friday, is a marketing term used to describe the Monday directly following Black Friday, generally when the greatest online deals are available. The term made its debut on November 28, 2005 in a Shop.org press release entitled “‘Cyber Monday Quickly Becoming One of the Biggest Online Shopping Days of the Year”.

Get up early and shop and check these links for what’s hot this year:

Black Friday 2022: The Best Sales and Deals to Shop

Black Friday 2022: Everything you need to know ahead of the year’s biggest shopping event

One Reply to “Black Friday By The Numbers [Infographic]”