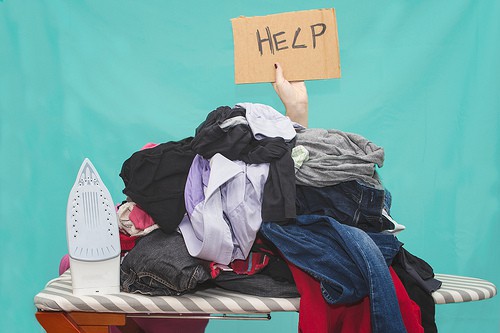 Clutter Defined: What’s Standing in Your Way? by @MelindaMassie

In anything organizing-related, you’re going to see the word “clutter” thrown around.

I’m certainly guilty of this. “Clutter” sounds much more neighborly than “junk” or “crap.”

The truth is, however, that items that are clutter may be valuable in their own right. The word “clutter,” on the other hand, is…well…generic. Generic makes it hard to know what to let go of and generic definitely isn’t fabulous.

So then what exactly is clutter?

Clutter is anything standing in between you and the house you want.

This means that any item – no matter the expense spent, no matter the value, and no matter whether it can be used or not – is clutter if it doesn’t contribute to your goals. If it isn’t adding then it’s detracting.

You’re worth more than that.

Where will I put this item? I don’t know. Throw it in a drawer. The cabinet. The spare room. The garage.

Garages are where decisions go to die. Don’t let yours die there, too.

So, my Sunshines, now knowing the true definition of clutter, do you have it in your own home? If so, it’s time to make some decisions. Some things to know going in:

And those reasons you’ve been telling yourself to hang on to things?

These are really just excuses and none of them matter if they’re standing in the way of your goal. I give you permission to let all that go. Guilt-free.

I guarantee you’ll feel AH-MAY-ZING afterwards. (Perhaps not during the process but definitely after.)

Best part? It’ll get easier as you go. Sometimes quicker too.

Pro tip: Perfection isn’t a goal. Those gorgeous home magazine photos? Staged. Nobody lives like that. Even in my clutter-free home I’d still adjust, move, and remove things if photos were being taken. We all have our own personal clutter threshold, so set a goal that is realistic to attain and maintain. In my world, if it doesn’t look bad, cause you heartburn, or make you crazy, then it’s delightfully dandy. You don’t have to be Martha if that’s not your cup of tea. Or glass of champagne.

How do you define clutter?

3 Replies to “Clutter Defined: What’s Standing in Your Way? by @MelindaMassie”