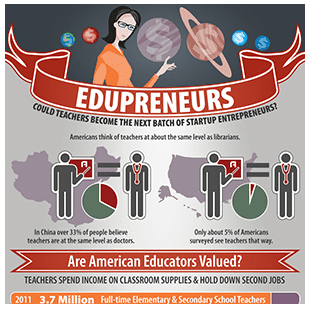 Edupreneurs: Could Teachers Become the Next Batch of Startup Entrepreneurs? [Infographic]

When comedian Rodney Dangerfield uttered the words, “I don’t get no respect,” millions of teachers and adjunct professors might have been nodding in agreement. According to a GEMS Foundation survey of 21 countries, Americans think of teachers at about the same level as librarians — meaning that they are not valued as highly as in other countries such as China, where they are perceived by over 33% of people as being at the same level as doctors. Only about 5% of Americans surveyed see teachers that way.

Teachers have been known to reach into their own wallets to buy materials they need for their students.
• In Fall 2001, there were about 3.7M full-time equivalent (FTE) elementary and secondary school teachers — an increase of 7% since 2001. (The total includes 3.3M public school teachers and 0.4M private school teachers.)
• The average amount spent by teachers on classroom supplies was around $485 for the 2012-13 school year, according to the National School Supply and Equipment Association. That’s just an average.
• A Sam Houston State University (Texas) study says that teachers spend an average of $700/year on supplies.
• Another survey of teachers in Texas shows that a few teachers there have spent over $1,000 yearly
• One Texas teacher as much as $7,000 in one year — though some of these higher figures are due to teachers buying lunches for poorer students.
• Only $250/year of a teacher’s classroom supply expenses can be claimed on income tax forms. All that extra money spent is after-tax dollars.
Some teachers take on extra work elsewhere, typically during the summer break though a regular second job is becoming more common. Some young female teachers might be going to extremes as “sugar babies” for wealthy men.
• According to one “companionship” Web site, as many as 40K female teachers across the USA are moonlighting as sugar babies.
• On that Web site, these teacher make about an average of $3K per month extra from this side work.
Other teachers are not so extreme and pick up part-time jobs wherever they can.
• Some teachers to spend 55-60 hours/week on school work, including the typical 40 hours during the weekdays, plus an extra 15-20 hours grading papers, prepping tests and so on. Hours for a second job are in addition to this time.
• About $56K was the average yearly salary for a full-time public school teacher in 2010-11, though in some parts of the U.S., $40-49K is a more typical range — which less than the national average salary of about $51K for all American households, regardless of breadwinner professions.
• A TSTA (Texas State Teachers Association) survey by the aforementioned Sam Houston State University release in Jul 2010 found that over 40% (40.8%) of teachers in Texas had second jobs during the preceding school year. (Note: sample size 907 teachers.)
• This is the highest rate since the first TSTA survey started in 1980, when the rate was 22%. In 2008, the rate was 28%.
• 56% of Texan teachers surveyed took on an extra job in the summer.
Now while the sample size of the Sam Houston 2010 survey was 907, the question is why is any of this necessary, if we value the education of our children? If children are our future and education is a strong component of that, why aren’t teachers better compensated?

Then there are adjunct professors in the USA, who after years of working hard to get a degree, are making so little at the universities they teach at — to the point of some being “poverty-stricken” and living off of food stamps. Part-time work for such teaching staff is more common than you might think.
• Private for-profit post-secondary institutions are more likely to employ part-time, poorly-paid adjunct professors than any other school category (private not-for-profit, public), especially for 4+-year programs.
• For example, 90% of instructional faculty at 4-year for-profit schools are employed part-time.
• In comparison, 34% of instructional faculty at 4-year public institutions are part-time employees.
• For 4-year, not-for-profit private schools, 43% of faculty are part-time employees.
• For 2-year associate degrees, 43% of faculty at private-not-for-profit institutions are part-time. The rate is 64% for private for-profit institutions and 70% for public institutions (community colleges included).

It’s surprising that this sort of thing is happening in such an affluent country as the United States. However, this is a “land of opportunity” and there is a growing education market with room for educators with an entrepreneurial mindset — edupreneurs.
• A 2013 Cisco whitepaper suggested that the value of the market for a “connected (online/ mobile) private college education” was about $78B yearly in profit.
• Silicon Valley venture Capitalist Fred Wilson, in 2012 presentation, indicated that $389M in VC funding was given to just K-12 educational startups in 2011.
• That’s more than 3 times the VC funding offered in 2010.
• In 2005, that number was $13M.

How Educators Can Become Edupreneurs

The EdTech (Educational Technology) market is growing, and what better place for those with existing teaching experience to seek extra work or a slight change of career? The first step is research: study the niches and opportunities, determine an area of interest based on experiences and skills. Finding mentors for an EdTech startup business is a bonus. Some thoughts on EdTech opportunities:
• Collaborate. Instead of going it alone, form an EdTech startup with other disenchanted educators.
• Repurpose courses. Take existing curriculum materials and repurpose it for online learning in the form of ebooks, webinars and self-study courses. If you have the online infrastructure, create them as MOOCs — Massive Open Online Courses. Just make sure you create original material for your courses and other learning materials.
• Build language learning apps. This is a popular EdTech niche, though some might feel it’s already getting overcrowded.
• Use gamification. Create Web and mobile learning apps that feel like games by implementing levels, goals, etc., and offers rewards and badges for accomplishments.
• Create an advanced remote tutoring platform which implements video, chat, and computer screen sharing where appropriate for a subject.
• Build better study and exam prep apps (mobile or Web).
• Develop EdTech data and analytics services. Startup:Education, founded by Facebook CEO Mark Zuckberg, provided $4M in seed round funding in Oct 2013 to Panaroma Education (panoramaed.com), which offers K-12 survey and analytics services.
• Report on developments in the Ed Tech market. For example, EdSurge.com raised $1.5M in Feb 2014 for their Ed Tech coverage, reminiscent of Consumer Reports.
• Create a security/ authorization service for online test-taking.
• Consult. Devise credentialing and accreditation strategies for online courses and offer consulting services to online learning sites.
• Cater to other edupreneurs by offering services related to EdTech startups. For example, Dev Bootcamp teaches people with no computer programming experience how to code, in a multi-week course that costs $12.2K. Although Dev Bootcamp is geared towards people who want to start out with coding jobs, many intend to launch their own startup, a similar service for edupreneurs has potential, when the market can support it.
• Go beyond your borders. There’s need for a shift in education beyond the United States, and there are even a few “global education standards” initiatives.

Don’t focus on taking students away from traditional education. Focus on filling the gaps. It’s not just young students who want to learn; so do many who’ve been in the workforce for a few or even many years. The average edupreneur’s efforts might not make them a billionaire like Peter V. Sperling (Forbes 2014 ranking #1284, worth $1.3B), who made his fortunes partly from founding Apollo Group (an educational services company) and co-founding CallWave, Inc. (now known as FuzeBox, Inc. — an Internet and mobile communications service provider). However, filling a demand in EdTech increases the chances of not having to live off of food stamps or hold down a second job in addition to teaching.