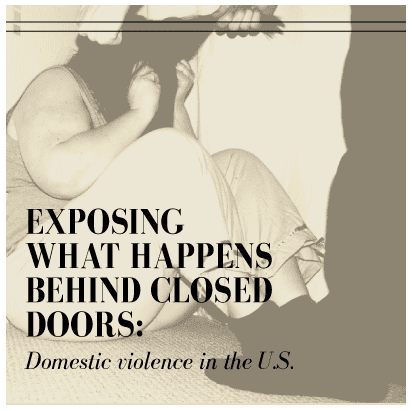 Exposing What Happens Behind Closed Doors: Domestic Violence in the U.S. [Infographic]

The editors at Social Work Degree Guide decided to research the topic of:

Exposing What Happens Behind Closed Doors: Domestic Violence in the U.S.

What is domestic violence?

– making (or attempting to make) an individual financially dependent by:
– maintaining total control over financial resources
– withholding access to money
– forbidding attendance at school or employment

– causing fear by intimidation
– threatening physical harm to self, partner, children or partner’s family or friends
– destruction of pets and property
– forcing isolation from family, friends, school or work

Domestic violence does not discriminate

– 2004 – 3 out of every 4 people surveyed by Allstate Foundation know someone who is or has been a victim of domestic violence
– Approximately 33 million Americans (15%) admit that they have been victims of domestic violence
– Every 9 seconds, a woman is assaulted or beaten
– 50% of men who frequently assault their wives also frequently assault their children
– Men who witness domestic violence as children are twice as likely to abuse their wives than those who grew up in nonviolent households
– Girls who witness domestic violence are more vulnerable to becoming victims as teens and adults
– Roughly 1 in 5 high school students reports being physically or sexually abused by a partner
– Date rape accounts for almost 79% of sexual assaults reported by adolescent and college age women
– 38% of these women are between 14 and 17 years old
– Domestic violence is the third leading cause of homelessness among families
– Cultural norms require men to put on a strong face while minimizing abuse by females
– men are less likely to verbalize fear

How many die from domestic violence?

The cost of domestic abuse

– Almost $4.1 billion is spent every year for direct medical and mental health care services for victims
– About half of all female victims report injury of some kind
– About 20% seek medical assistance
– Domestic violence victims lose almost 8 million days of paid work each year
– Equivalent of 32,000 full-time jobs
– Lost productivity accounts for nearly $1.8 billion

– Only 1 in 4 women and 1 in 7 men report being victims of domestic violence
– On average, 21% of female victims and 10% of male victims contact an outside agency for assistance
– Of those, 45% are private agencies
– Only 70% of domestic violence is reported to law enforcement officials
– Why don’t people report it?
– 41% of male and 27% of female victims stated that victimization is a private matter
– 15% of women fear reprisal
– 12% of all victims wanted to protect the offender
– 6% of all victims believed that the police would do nothing

The Violence Against Women Act was enacted in 1994

– Strengthened federal penalties for repeat sex offenders
– Created a federal rape shield law, which prevents offenders from using victims’ past sexual conduct against them during a rape trial
– Mandates that victims, no matter income level, are not forced to pay for their own rape exams or service of protection orders
– Requires that protection orders be recognized and enforced in all states and jurisdictions within the US
– Helps communities develop dedicated law enforcement and prosecution units against domestic violence
– he VAWA funds train over 500,000 law enforcement officers, prosecutors, judges and other personnel every year

There are multiple hotlines for victims of domestic violence