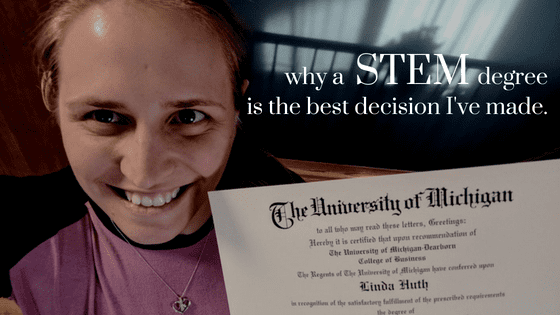 I remember sitting in college during one of my first computer coding classes. It was the lab portion of the class and there were about twenty students. However, I was the only female. It hit me, I was in a male-dominated field, and I better get used to it.

In college, I chose to major in Computer Graphics Technology with a focus in web design and development. This meant, that I not only knew how to design things but I could code them as well. I enjoyed learning the back end of websites. How everything would go together. It was all a big logic puzzle, figuring out how to arrange the code so that I could get the result I wanted.

I am so glad that I pursued a STEM degree and I think that other women should as well.

First of all, working with technology is cool and exciting. Want to work on autonomous cars? Want to figure out how to make the next Facebook? Well, you need to learn how to work with technology. Technology is here to stay and the more you know about it, can work with it, and develop with it, the better off you will be.

Majoring in a STEM field (something in Science, Technology, Engineering or Math) allows you to do just that. A STEM degree will give you the foundation on which to build your career. You will usually get to work with the newest technology and you have the opportunity to always be learning something new. The best part, you don’t have to be a pasty white nonsocial computer geek to be a STEM major. You can be a cheerleader, soccer player, flute player, or theater geek. There is no stereotype that you need to fall into a passion for technology and learning is all you need.

I am in demand.

I am a female, I write code, and I do it well. This means I’m always in demand in the workforce. I bring diversity to male-dominated teams and a unique perspective. Did you know that having women on your team can actually help you perform better? Having a diverse team is good for you, your team, and your company.

This positioning gives me the opportunity to choose jobs that will get me closer to my career goals. I don’t have to take what is available and I don’t have to stay in a job that won’t advance my career either. I’ve always had options and options are a good thing.

I get to be a role model for younger girls.

It’s hard to vision your future if you’ve never seen anyone do something like it before. By being in a STEM career I get to be a role model for other girls. I can show them that you can excel in school and get a great full time job in the career you want. That you can still get married and it’s even ok to make more than your spouse.

Women are underrepresented in STEM careers and I love that I can be a “normal” role model for the girls around me.

Do you love technology? Are you considering a STEM degree?

Linda Huth is an IT and software development expert and the founder of www.sheclimbstheladder.com.

During the day you can find Linda leading development teams through the daily grind of the corporate world. By night she can be found sharing what she’s learned on her blog. She enjoys being a female leader in the corporate world and hopes to be a resource for others doing the same.

In her free time, Linda can be found at her local Crossfit gym or working on one of her many home remodeling projects.

As a member of the UN Empower Women working group, I often get really fun blurbs in my inbox. This month, I got the following prompt for a global conversation about encouraging and inspiring women in Science, Technology, and Innovation:

The Sustainable Development Goals represent the commitment of member states and others in the global community to achieve social, economic and environmental justice for a sustainable world. Advancement of gender equality, and equitable science, technology and innovation (STI) are explicit objectives under several of the SDGs, but they also underpin all of them. — UN Women

Working group members contributed to an online conversation, with several questions as prompts. I wanted to share, if I may be so bold, the first two questions and my answers. 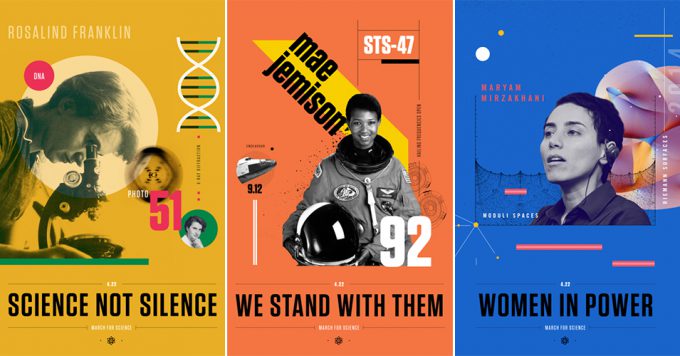 Poster by A Mighty Girl

Q1. Is “inclusion” enough? Does just having greater numbers of women in the STI ecosystem result in the future we want?

Inclusion is not enough. A properly crafted ecosystem would equally meet the needs of both men and women. Author and Yale alumnus Tara Mohr wrote, “[Women] had been allowed to join the institution [Yale] and participate in it, but there had been no inquiry into how to significantly adapt the institution so that women and men would thrive equally there.”

Inevitable result: women and men do not thrive equally there.

I feel that this is the tipping point we are currently witnessing. For decades, women have been entering the work force. This has contributed immensely to elements of empowerment such as financial gains. However, they entered a largely unchecked and unchanged system. During those same decades, women have not had significant opportunity to craft employment policy or regulations. Nor have women had meaningful impact on how work is valued and performed. This is why we are now seeing large numbers of incredibly qualified women quitting STI. Employers are encouraging cultures of blow back while simultaneously being sued for it. Innovation and real benefits are stagnant.

The question itself is reductive. Simply having more of something doesn’t make anything “better,” necessarily. There are economic theories to back this up (the law of diminishing returns comes to mind). The quality of the ecosystem is much more valuable than the size of the ecosystem in driving future growth and success. 10 great women working in an environment that is equally great are going to impact quality more than 100 great women working in a poor environment.

Q2. Does bottom-up and community level engagement of women in STI offer additional or greater opportunities for creating more gender responsive STI, including in comparison to more top down systems?

There is no question that bottom-up leadership will impact positively on the futures of women in STI. Any number of grassroots movements would prove that theory out. The successes of Second Wave Feminism in the mid- to late-20th century are a good example. However, the shortcomings of each of those movements is also reflective of the greater society in which those movements are operating.

According to the World Bank’s Citizen Engagement project, grassroots change is only effective if the entire system is willing to accept that change. Fundamental top-down social change must include women invested in the bigger picture.

Huge numbers of women certainly have the opportunity to get involved in STI at the grassroots level. This is very important. The gender responsiveness they can create will be powerful indeed. At the same time, someone needs to be listening from the top down to this movement. This is why women need to have a strong presence at that level as well. In the end, each will inform the other. Generally accepted social science theories admit that there is no real value in using “either-or” statements to explain human behavior. We must strive for inclusion by accepting the idea that both levels constantly influence and reinforce the other. This creates a virtuous cycle.

Where do the readers of SheOwnsIt.com come down on women in Science, Technology, and Innovation?

This is mission critical for me as a professional woman, of course! I want to hear from you about your opinions. We must always be looking to develop best practices and find ways to support and encourage this all-important set of goals.

For more information on the UN Women’s Empower Women working group discussion on equality in Science, Technology, and Innovation, visit the website.

Hillary Strobel is a single mother, fierce learner and teacher, ardent lover of life, and the ass-kickin’ President and CEO of The Flyways, Inc. We publish story projects that are interactive and highly creative, and 25% of profits are donated to support social justice causes: from business incubators serving vulnerable women, to agencies working to reduce recidivism rates.

Hillary also runs a consultancy for businesses and organizations seeking to meaningfully build social impact programs from the ground up. The three pillars that support this mission are: designing outcomes and developing goals, measuring impact and creating a universal metric, and quantifying results to the public.

After a long and varied career in just about every kind of Liberal Arts field imaginable, and in every type of job — volunteer, employee, entrepreneur, non-profit worker, and freelancer — Hillary has decided to marry her two deepest passions: storytelling and social justice. The results have surpassed her wildest expectations.