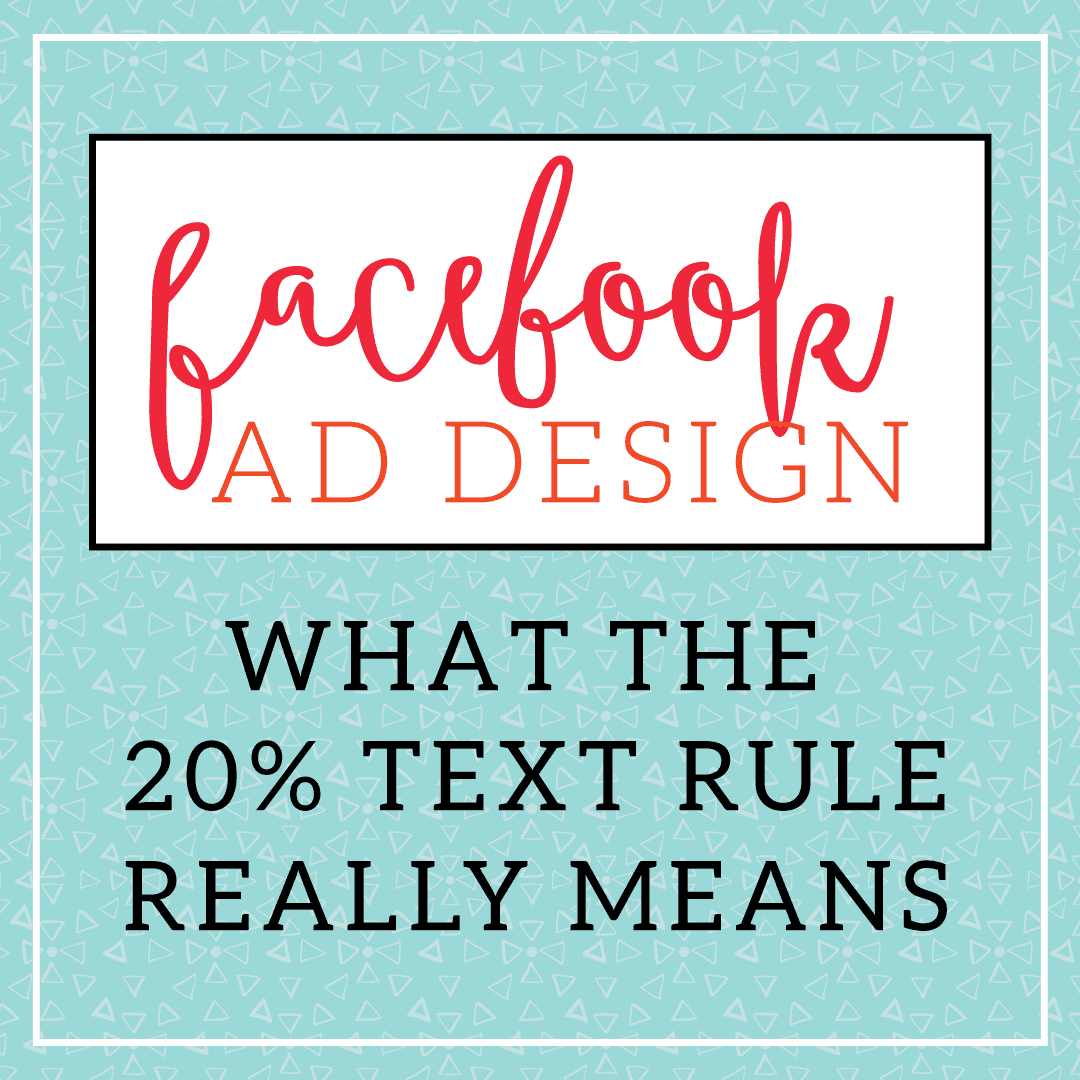 by sponsor Megan Ronecker of Ruby and Sass Design


Facebook Ads are becoming so popular, you’ve probably considered giving them a try. Chances are, you started looking into it and realized just how daunting a task it is- 20% percent text rule? A/B testing? Conversions? Ugh, so much to learn! And it’s not just running the ad that takes skill, designing the ad does too. But that’s where I come in! To make designing your ad a little less confusing (and a lot less time consuming), you must first understand the 20% Text Rule.

What It Means:
On the surface, the Facebook’s 20% Rule seems pretty self explanatory, and it is. Strictly speaking, your ad cannot contain more than 20% text on the ad image.

BUT- There’s A Catch (a pretty big one!):
And this is what tripped me up big time the first time I designed them for a client. It’s not just 20% surface area text. The text is confined to certain areas, or boxes, if you will. So you can’t just put your text anywhere you want (that would be waaay to easy! Facebook wants you to work hard!)

So, What Does That Mean?
The best way to show you is in an example. See below:

The way Facebook determines how much text you’ve used is by dividing your ad image into rectangles and then determining how many rectangles have text in them. The first time I was designing Facebook Ads I didn’t realize it It doesn’t matter to them how much text is in the rectangle- if there’s any text in the rectangle, it counts is as full. So even though your rectangle is only half filled with text (or even just a tiny bit in the corner), it still counts as full of text. With an ad this size of 1200 x 628 (one of the standard ad sizes), you’re only allowed 5 rectangles to fill. Is that frustrating? Yep. Is it fair? No, probably not. But you and I both know that Facebook probably doesn’t care, they’re just trying to make sure people don’t use a lot of text. 5 rectangles- use them wisely, grasshopper

What The 20% Text Rule Includes:

-Any text added to your ad

What The 20% Text Rule Doesn’t Includes:

-Pictures of products that include text on the actual product (ex: book covers, album covers, movie posters) Though, they warn against text that has been photoshopped on the product to get around the 20% rule, that’s a No No!

-Cartoons in which the text is part of a cartoon

How Can You Know If You’ve Used Too Much Text?

You can use online grid tools that you upload you photo to:
Facebook’s Grid Tool
20percentrule.info

I actually created my own grid that I overlay on my designs in Illustrator (like shown above) so I don’t have to constantly upload it to these sites. If you’re handy in illustrator or photoshop, that’s an option too!

Megan Ronecker, the quick-witted girl behind Ruby and Sass Design, specializes in Branding and Identity Design as well as other graphic design work for small businesses, bloggers and Etsy shop owners. She’s passionate about helping them create an image and a brand that’s completely and 100% authentic to their business. After graduating from college with a degree in business and marketing, she realized that she was longing to get back to her creative roots. She taught herself Illustrator, started designing on the side, and fell in love. Ever since, she’s been overjoyed to use her creative abilities to help businesses stand out in this increasingly visual world. She knows what makes great design work – and also is not ashamed to admit that at least 60% of products she buys are because of a pretty packaging design. When not obsessing over fonts and color palettes, Megan enjoys exploring new restaurants with her husband, Kevin, picking up a good book and winning at board games in their hometown of St. Louis, MO.