While this might paint a grim picture in your minds, it’s far from that. In fact, 71% of marketers still feel that influencers can make a positive impact for their brand during the pandemic. Also, once the lockdowns are lifted, about 74% of marketers plan on doing as many or more influencer marketing campaigns.

Mobile apps flourished during this time.

The Rise of Mobile Apps

As people were more confined to their homes, they increasingly started turning towards their phones. In fact, mobile phone usage increased drastically due to the COVID-19 outbreak around the world.

This meant more usage of mobile apps. Thus, it made sense for mobile app companies to promote apps on social media.

One of the major reasons for this is the boost that social media platforms have managed to get due to the pandemic. Messaging across Facebook, WhatsApp, and Instagram grew by 50% in the past few months.

This means that apps had a chance to reach their audiences with ease through social media.

Influencer marketing, being one of the best ways of reaching people on social media, did thus see many partnerships between apps and influencers.

But apps aren’t the only ones benefiting from the pandemic. Ecommerce stores experienced a tremendous boost too.

Let’s take a look at them.

A Big Boost for Ecommerce Stores

This meant that ecommerce stores could proceed with their business without any competition from brick-and-mortar stores. As a result, the number of first-time purchases on ecommerce stores of traditional chains across the US and Canada grew by nearly 119% as compared to the previous year.

The first-time purchases from these stores grew by 53% as compared to 2019.

As a result, these businesses partnered with influencers to promote their products and grow their sales.

For example, Ickle Bubba partnered with Jade Marie King to promote their stroller. 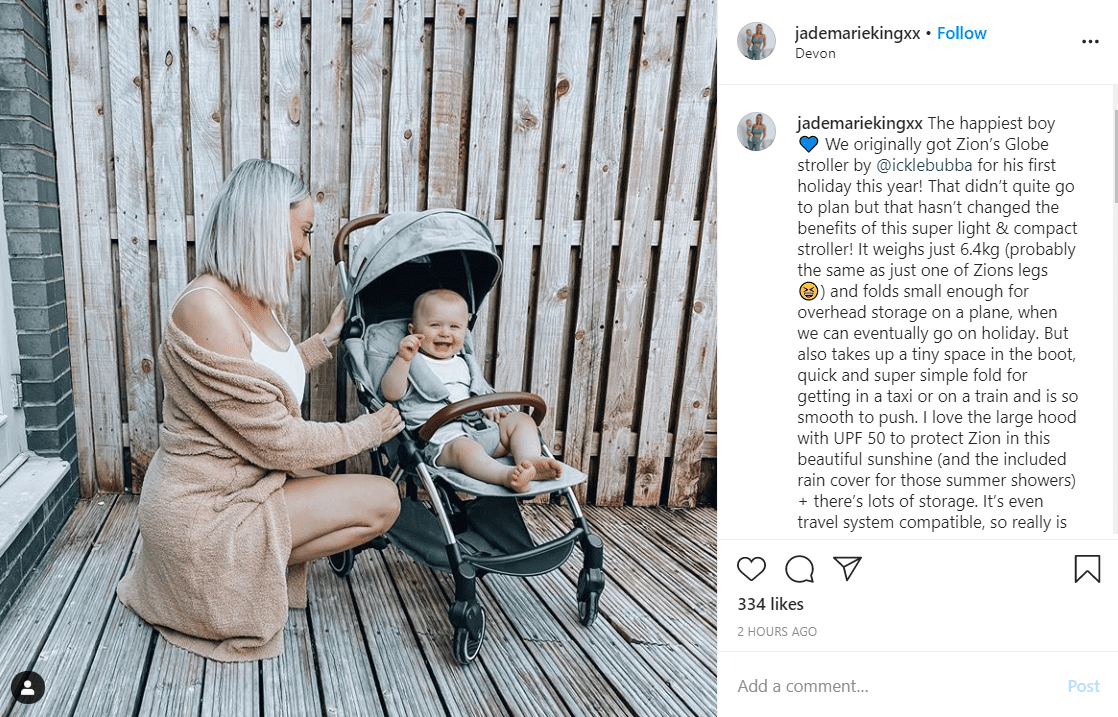 These businesses could also leverage social media ads to promote themselves. They can also leverage dynamic ads to get people to purchase from them. These ads mean that the audience can instantly purchase the products by clicking on the links. Also, online course producers can promote their own courses on the best online course platforms and can earn good ROI in this pandemic time.

But that’s not all.

Even email marketing has worked well for brands.

In fact, the number of email sign-ups has risen by 89% for traditional chain stores according to the same Bluecore study. Similarly, digital native ecommerce stores experienced a 25% rise in email sign-ups too, (as compared to the previous year).

And that’s not all.

All stores have experienced growth through email marketing from February, including traditional department stores. Even they got a 19% increase in the number of new sign-ups in April as compared to February.

One of the ways companies are growing through email is by utilizing cold email tools into their marketing arsenal.

Transparency is the Key

As the traditional stores closed down, the demand from online consumers skyrocketed, as can be seen from the stats above. This meant that the brands needed to be more creative, authentic, and transparent with their consumers.

It has become essential for them to win the trust of their consumers. For this reason, many brands started partnering with their existing customers. This helps boost their transparency as the customers will write authentic reviews about the brand.

It also means that the brands don’t need to spend big bucks on partnering with mega-influencers to woo their audiences.

The focus of many brands is thus shifting to nano-influencers, i.e., their customers.

The COVID-19 pandemic has led to a meteoric rise in internet usage. With more people sitting in their homes, social media and app usage increased too. It also meant that many people ended up purchasing products from ecommerce stores as the brick-and-mortar stores were shut.

As a result, many brands reached out to influencers to partner with them to promote their products. Many of them even ended up partnering with their customers to win the trust of their audience.