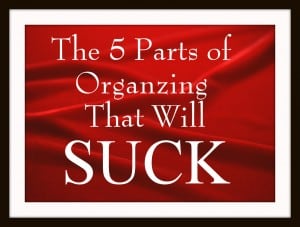 You’ll find TONS of articles out there about getting organized and the vast majority – mine included – make it sound so “la, la, la,” easy-breezy and such. For the most part, it is.

Then there’s the other part.

This is the part we gloss over, hoping you’ll continue to read our articles and buy our services. Truth is, however, that it isn’t always so easy-breezy.

In my past life as an event planner, I worked for an organization that held 80+ events a year. The majority of these were outside, and weather could be as temperamental as a bride whose cake just fell. It could get intense, and I couldn’t have done it without my amazeballs staff. They rocked. How did I create my fabulous team?

I gave them the good, bad, and nasty up front.

During the interview, I made the position sound heinous. “We work in 100+ degree heat, freezing cold, storms, sleet, and the stink from exotic animal poo. Don’t forget to look happy while you do it!” If they were still interested, I knew they were for me.

Obviously, I’m all about the fair warning. Following are 5 things that most likely will happen while you’re organizing. Yes, it’ll suck. But hopefully this helps you best prepare so you can work through it with ease.

Any current mess will get worse before it gets better. If you don’t currently have a mess, then you’ll make one. Broken systems must be torn apart to be rebuilt better. Think back to your last “some assembly required” furniture. When all the pieces are all laid out, it is bedlam. As you put the pieces together and assemble them, they make more sense. Next thing you know, you have lovely, new furniture. Organizing works in the same fashion – rip it apart, splay it across the floor, then re-assemble in a new way that works better.

Double or triple the time you think it will take. Minimum.

I’m all for good, old-fashioned, three-martinis-in optimism. I also know that it took more than a day or weekend for things to reach their current state. This means it’ll take longer than that day or weekend to get out. On average, I spend 8 to 24 hours on each client room. This doesn’t include their time doing “homework.” Seem excessive? Think of it this way. It’s like slowly gaining weight over 5-6 years. You don’t notice, and all of a sudden you’re asking, “Where did this extra 50 pounds come from?” A weekend cleanse isn’t going to do the trick, right? Just as dropping excess weight takes daily work, good decisions, and time, so does letting go of excess clutter. You can grumble or take charge. (FYI, grumbling is neither productive nor fabulous.)

The process is tiring – physically, mentally, and emotionally.

Since clutter represents our unmade decisions, it’s time to put on our big-girl stilettos and make some. There’s a reason why you put it off – perhaps simple, but most often deeper. Physical tiredness is easy to expect: we are schlepping around stuff. But the mental and emotional tiredness? Less expected. Mentally, you’re going from putting off decisions to making many at once. This creates decision fatigue. Honor that, and back off when you aren’t making good decisions anymore. (But only back off for a few hours or a day – not forever!) Then there are the deep, negative, emotional ties holding us back. Face them. You’ll have to eventually, so you may as well start now. Don’t bring on harsh judgment. Just sit with the feeling, offer it a cocktail, and then set it free. Anything with negative juju does NOT get to take up precious space in your head, heart, or home.

There could be tears.

One of my clients specifically requested I tell you this. With the negative emotional ties often come tears. Our first impulse is usually to stop them, but go with it. Crying is cleansing and makes it easier to move on. I may or may not have cried with my clients. As Truvy in Steel Magnolias says, “I have a strict policy that nobody cries alone in my presence.”

(Side note: DON’T wallow. Run with it for a bit and then let it go.)

You have to break current habits and build fresh, new habits.

To let go of clutter for good, you have to revamp your thinking. Current habits created the current state. Develop new, different habits to change it and prevent it from reoccurring. While you’re working on changing habits, be compassionate with yourself. Have patience. You may slip back into the old habits, but just breathe and reboot. Over time the new habits will become second nature. Promise.

These things that suck can make it hard to believe that you’ll reach your goal, so always celebrate each win, no matter how small. Clear counter? Happy dance! Pretty pantry? Mani/pedi time! Crave-worthy closet? Pop the bubbly! So what if the “spare room of doom” is still waiting? Work through the things that suck and celebrate the newly-created space each time it appears. Come hell or high water, you CAN be clutter-free and organized.

If you are currently or have already done the work, what do you wish you had been warned about?