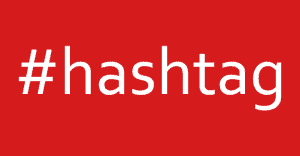 The answer is yes.

To me if the content of the social media message you post is not enough to capture the interest of your audience why would you think Hashtags would?

The reason hashtags were developed was to provide a way for all the social media associated with a hashtag to be gathered in one place.  Hashtags can be created for a subject of an event.  A viewer could click on the Hashtag and see everything about that subject or everything that includes that Hashtag listed.

But now, there are so many people using sometimes dozens of hashtags in their social media for no reason other than wanting people to see them as knowing what they are doing…which they do not.

What does it mean when more than one Hashtag is provided?

When I go to answer that questions this classic video does it better than I could.

I could also answer that question by saying the use of more than one hashtag indicates that the user does not know what they are doing…or cares.  But I won’t.

Usually, the person (Place or Thing) who uses more than one hashtag will create ‘Vanity Hashtags’ which only are relevant to the user.  Vanity Hashtags mash together a phrase in hopes it impresses upon readers someone’s cleverness.

What hashtag posting is really doing is killing social media.

As I have mentioned a number of times, the dark side of the internet loves to see people post a large number of Hashtags.  Hashtags for the deviants of the internet are an open invitation for them to Spam those Hashtags with all kinds of Spammy stuff making the entire Hashtag a waste.

Hashtags can be good for events or Live Video Streaming..that is if only one hashtag is developed for the event or streaming.  Going for more than one Hashtag in a post is like waving a red flag to a bull….not a really good idea.  Stop the madness and…let me know how I can help.

"I am a consummate organizer and project manager who searches for ways to help business owners do business better.   My background in analytical problem solving, along with process management experience, allows me to develop sound strategies for our clients."There are not many of Me left…, or should I say… available since those of us with decades of real-life business operations are usually snatched up by businesses who understand the value of having someone like me keeping their business afloat.I am the Director of Operations for SyncLab Media, a video-centric digital marketing consulting agency.  I also sit on the board of directors of a number of golf-related businesses.I have deep experience in process management, business operations and understand first-hand how social media really works in the business world today.I spent over 30 years in the middle of some of the worst messes a fortune 100 corporation can get its operations into and was part of the many solutions that got them straightened out.Crisis management is in my blood, solid solutions are in my DNA and ‘not stopping until the job is done’ is just my a way of life for me.