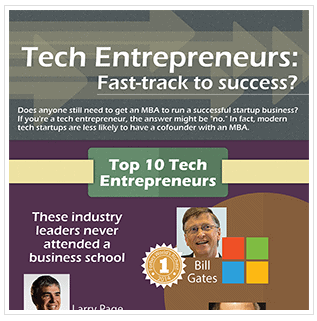 Do You Really Need an MBA to Launch a Tech Startup? [Inforgraphic]

Does anyone still need to get an MBA to run a successful startup business?

Do You Really Need an MBA to Run a Tech Startup?

Does anyone still need to get an MBA to run a successful startup business? If you’re a tech entrepreneur, the answer might be “no.” In fact, tech startups – especially recent ones – are less likely to have a cofounder with an MBA. For example, here are 10 American tech billionaire entrepreneurs who did not go to business school: Larry Page (Google), Jeff Bezos (Amazon), Sergey Brin (Google), Mark Zuckerberg (Facebook), Jan Koum (WhatsApp), Brian Acton (WhatsApp), Drew Houston (Dropbox), Larry Ellison (Oracle), Bill Gates (Microsoft), and Steve Jobs (Apple).

On the flipside, several successful entrepreneurs do have MBAs: Frank Batten (Weather Channel), Phil Knight (Nike, co-founder), Scott McNealy (Sun Microsystems, co-founder), Meg Whitman (eBay), Warren Buffett (Berkshire Hathaway). Of that group, 3 are billionaires: Phil Knight (#42, $18.4B), Meg Whitman (#869, $2B), and Warren Buffett (#4, $58.2B). Buffett is the 2nd richest person in America, as per Forbes 2014 list. With the exception of McNealy and Whitman, however, none are tech entrepreneurs.

If you’re inspired by the latter group of entrepreneurs and want to go to B-School, where do you go? There are over 12K (12.6K) schools worldwide that offer business degrees.

• 90% of these schools are unaccredited.
• The schools in the remaining 10% accept less than 50% of applicants.
• Of this latter portion, some have resources for entrepreneurs, and some even have small business incubators. The incubator run by Darden’s Batten Institute, for example, has launched at least 60 companies (as of Sep 2011).
• However a top B-School like Harvard Business School can cost over $170K for a 2-year MBA.
Could that tuition be put to better use? It depends. For each of the successful people listed above without business degrees (or even with business degrees), thousands more fail at sustaining their startup.
•  Roughly 50% last 3 years or less.
• Less than 30% last 10 years.

Many of the non-MBA entrepreneurs listed above were fortunate in one way or another. Some managed to secure government contracts that gave them a base for success. Others had powerful friends to invest in them. Most created something (software or online services) that businesses and/or consumers wanted and that VCs wanted to fund. Business school can be beneficial for some people. It teaches students up front what non-business-school-educated entrepreneurs have to learn on their own: teamwork and business relationships are the core of success, as well as the basics of running a business.

However, if you have a clear business idea, an understanding of the product or service you want to offer, know who the customer is, know who the suppliers will be, are itching to get going and are sure there will be investors, you might be able to skip B-School — assuming you have enough capital to get through a lean period of business. Without those qualities, B-school might be a better choice. That also goes for people who like stability of job, income, healthcare, and healthy meals. Entrepreneurs often need to take risks, work long hours, wear many hats, and make all kinds of sacrifices – as cliched as that sounds. WhatsApp co-founder Jan Koum, whose company sold for $19B to Facebook in early 2014, was living on food stamps at one point. He’s hardly the only startup cofounder to go through this sort of instability of life. Bootstrapping becomes a necessity of entrepreneurship. Other skills and behaviors of entrepreneurs:

• Getting the resources your startup needs while having little or no budget. This means learning to borrow, barter or bargain with others without fail, and preferably without embarrassment.
• Ditching the discomfort of approaching people for funding. Persuading others to invest has to come before the VCs.
• If you’re an online startup, you may have to embrace Open Source out of necessity.
• You also might have to leverage the free aspect of freemium web services — at least until you can pay for the services.
• Learning to delegate as the company grows.
• Leveraging unpaid interns. Even better if they can work remotely.
• Forgoing an office and working entirely out of your home.
• Learning how to rally your team — which might be harder if they are in fact remote.

Going to B-School vs Attending Bootcamps and Startup Labs

Some of the above are skills that you learn in an MBA program, under guidance instead of the hard way. However, if you’re planning to defer running a startup several years from now and just work for a while, consider this comparison of learning costs and return on investment.

• Dev Bootcamp, which teaches people with no computer programming experience to code in a 10-week course, has a hefty price of $12.2K, but nowhere near the cost of a typical MBA program — which is comparing apples and oranges, unless you plan to start a tech company. Still, 88% of 2012 Dev Bootcamp grads had job offers at an average of $79K.
• Comparatively, MBA grads with one year or less of experience had 2012 starting salaries averaging just over $46K ($46,630), according to Payscale.com.
• On the other hand, if you were a Harvard MBA grad in the class of 2012, there was a 95% chance you were employed within three months.
• Unfortunately, grads from other MBA schools, such as USC (University of Southern California) — a well-known school — had a higher rate (23%) of unemployment three months after graduation.

Complementary to Dev Bootcamp, Galvanize (http://galvanize.it/) is a hybrid startup incubator in Denver, Colorado, that “invests in visionary early-stage companies.” They offer workspaces for small teams and opportunities for learning for entrepreneurs launching tech startups. Galvanize also provides mentors and helps founders solve problems. Like Dev Bootcamp, Galvanize has a fast-track coding course (in web development) that costs $18-20K  (depending on payment schedule) and runs for nearly six months. They have a 3-year payment plan and up to 11K in tuition can be deferred. Their guarantee is that students who pass but do not find a full-time developer job paying $60K-plus per year can ask for their money back. They also have shorter coding workshops that run a few days long and focus on specific web design topics. Women’s Startup Lab (http://www.womenstartuplab.com/) in Menlo Park (Silicon Valley), California, offers women entrepreneurs mentorship, courses, workshops and talks led by industry experts, and networking opportunities with other founders, with tech people, and VCs. They’ve split participation into three parts: The Club, Innovation Lab, and Founder’s Circle — depending on where an entrepreneur is at in terms of launching her startup. These three programs range in cost from $450 to $4,500.

LinkedIn’s Analysis of Founding Entrepreneurs and Their Alma Maters

A Sep 2011 analysis by LinkedIn of the profiles of their then 120M-plus members shows that certain business schools produced more entrepreneurs than others — and they were not necessarily in the traditional top-10 B-Schools list. This is in sharp contrast to rankings by Princeton Review and U.S. News & World Report, two long-popular lists of “top B-Schools.” (Critics claim that one list has university deans rank programs they are not intrinsically familiar with, and the other has nebulous ranking criteria.) The Linked analysis looked at “tens of thousands  of startup founders’ profiles” – as self-identified by LinkedIn professionals themselves as founders/ co-founders of American companies launched after 2000. Further filter criteria:

• Had a company profile on LinkedIn
• Had 2-200 employees at the time.
• Excluded “small law, consulting and real estate firms, as well as LLCs.”

The total pool of entrepreneurs profiles analyzed numbered over 13K. Here’s what they found:

• 2% were serial entrepreneurs
• 1% were under 20 years old at first startup
• 34% were 20-29
• 40% were 30-39
• 20% were 40-49
• 5% were 50+
• The “top industries connected to founders,” in decreasing order: Venture Capital, Online Publishing, Internet, and Recruiting.
• The top 5 “most entrepreneurial majors,” in decreasing order: Entrepreneurship, Computer engineering, Computer science, Physics, Electrical engineering.
• The 5 “least entrepreneurial majors, from lowest up: Nursing, Administration, Human resources, Social work, Education.” (Although it should be pointed out that since the LinkedIn report, numerous Connected Ed(ucation) startups have been launched.
• The three top startup regions (rankings not indicated) are San Francisco, New York City and Boston.
• Certain companies seem to breed or incubate entrepreneurs. Founders often come Adobe Systems, Apple Inc., eBay and PayPal, Electronic Arts, Google, Microsoft, SGI, Yahoo! and others.
• Certain industries, such as semiconductor and pharmaceuticals, are harder to break into. This is determined by the amount of previous industry experience of entrepreneurs before founding a company.
• Other industries tend to be easier to break into, including “retail, consumer goods, leisure & travel and professional training,” based on the little to no previous industry experience of founders.

Finally, the top 10 schools that produced entrepreneurs were as follows:

Of these, Dartmouth and Cornell did not even rank in the 27 schools that U.S. News ranks. As well, only Stanford, Babson and Darden ranked in Princeton Reviews 25 schools. While this analysis is over 2.5 years old at the time of writing (it’s not clear if LinkedIn plans an update) and rankings may have changed since, this shows, based on statistical evidence, that even top-ranked B-Schools do not necessarily produce entrepreneurs that launch a business. However, in recent years, some B-Schools have launched entrepreneurial programs and even startup incubators in the past few years. For example, 7.4% of Wharton’s Class of 2013 MBAs had startup plans, compared to 1% of the Class of 2005. That said, the Class of 2013 may have to pay a combined $100M or more in tuition loans and interest. So the pendulum on deciding whether or not to get an MBA swings back and forth. Ultimately, people have to decide what their existing skillset is and whether they have the personality of an entrepreneur. It of course matters what industry the startup will be in, as some industries need more infrastructure than the typical online tech startup — which can be launched from home, if need be. So if you eschew an MBA to found a company, if it’s going to be a tech startup that fills a niche, you are much more likely to succeed without an MBA than for other industries. The resources for learning what you need are likely online or available in various Bootcamps and workshops. If you are the type of person who can handle rejection and failure and keep persisting, you might not need an MBA.