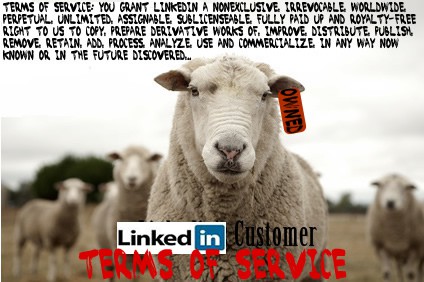 
This is a cautionary tale for women. As a social media strategist, I am a member of just about every platform and I enthusiastically use them. Linkedin is the ONLY one where I consistently have had issues with harassment, inappropriate advances and unprofessional conduct. What’s more, Linkedin has done little to address the rapidly growing concerned voices of women – Linkedin has a Stalker Problem, The 11 Creepiest Things about Linkedin. In fact, they put us in even more danger by selling our profile to whoever pays to access their new Sales Navigator tool.

Let’s log into my account so I can show you some of the issues women face because Linkedin’s management and board are more interested in how they can pimp a profile instead of put proper privacy controls in place.

RESTRICTED! I was put in this status after I got tired of being harassed by a man whose profile claimed the title of “managing director” of an investment firm, but he publicly and privately wrote comments like a common misogynist thug. I was called from Linkedin’s offices and told that his behavior was not out of line, allowing me to conclude some relationship exists between  management or board online and the man with the dislike of women . Here is a taste of his prose:

M.S. (his initials are M.S.) Managing Director -Your thesis statement is “the suggestion that our lives can be altered by Facebook posts is completely absurd.” Are you truly will to defend your assertion that people’s lives are unaffected by the inputs they receive?! Wowzer Lady, there’s millions of psychologists you’ll need to catch up on your new “reality. (And your answer to Simon is laughable. I mean, I literally made noise I laughed so hard. “That evidence pre-dates Facebook.” That’s like saying “If you give someone feces in a red bag, and it smells, all evidence is suddenly irrelevant if we witch to a blue bag.” You’re a hoot. You’ll love TMZ, by the way – just your speed of “journalism.”

This is a professional?

I’m picking out his best stuff. Sadly the post I wrote was pretty good and was viewed by over 22,000 people. As it rose higher, he got even more agitated.

I have no idea where the bullying suggestion came from. People on the thread did step up and call him a bully, but he was erratic and his need to destroy me apparent. I did not engage with him in conversation until he looked at my profile.

This is where Linkedin has a responsibility. No one is supposed to be able to view another person’s profile without being connected. Not  only can they view it, Linkedin is selling it.  The company’s Terms of Service was labeled one of the worst by CNNMoney.

To see how you’re being manipulated, you need to start with the one line in their privacy policy: We protect your personal information and will only provide it to third parties: (1) with your consent;

Sounds great because you would never give your consent, right? Wrong. When you create a profile, you agree to Linkedin’s Terms of Service. 2.2 is important because this is where you give up everything and consent:

2.2. License and warranty for your submissions to LinkedIn

You still own what you own, but you grant us a license to the content and/or information you provide us. [FOR FREE – DEMAND TO BE PAID FOR THIS]

As between you and LinkedIn, you own the content and information you provide LinkedIn under this Agreement, and may request its deletion at any time, unless you have shared information or content with others and they have not deleted it, or it was copied or stored by other users. Additionally, you grant LinkedIn a nonexclusive, irrevocable, worldwide, perpetual, unlimited, assignable, sublicenseable, fully paid up and royalty-free right to us to copy, prepare derivative works of, improve, distribute, publish, remove, retain, add, process, analyze, use and commercialize, in any way now known or in the future discovered, any information you provide, directly or indirectly to LinkedIn, including, but not limited to, any user generated content, ideas, concepts, techniques and/or data to the services, you submit to LinkedIn, without any further consent, notice and/or compensation to you or to any third parties.

IS THAT ENOUGH TO MAKE YOU SHUT DOWN YOUR ACCOUNT YET? No. Read on.

2.2 (cont) We will respect the choices you make about who gets to see your information and content.

Pursuant to this license, LinkedIn may grant other Members and/or Visitors access and share rights to your content and information in accordance with this Agreement, your settings and degree of connection with them.

Lastly, when you are viewed  by others, there is the option to go stealth or anonymous,something that does not sit well with many Linkedin customers. As one user stated in a forum thread: “This is a site specifically created for networking only. Why would anyone choose to be anonymous if they are just reviewing your information to see if a connection would help him or her to find a job/internship/advice/etc? These anonymous people are just out to do bad things or stalk people.”

The mission of LinkedIn is to connect the world’s professionals to enable them to be more productive and successful. To achieve our mission, we make services available through our websites, mobile applications, and developer platforms, to help you, your connections, and millions of other professionals meet, exchange ideas, learn, make deals, find opportunities or employees, work, and make decisions in a network of trusted relationships and groups.

Admittedly, none of this came to light until I was harassed by a Linkedin friend of management who likes to bully women? people? for sport when they post thoughtful articles. When M.S. began creeping on my Linkedin profile, I sent him  a  pathetically weak Inmail: “STAY AWAY FROM ME. DO NOT LOOK AT MY PROFILE. DON’T COMMENT ON ANY MORE OF MY POSTS. LEAVE ME ALONE.”

Of course the man responded and no we were not connected or “linked.” He claimed he was trying to block me EVEN THOUGH I had not once written a reply to his posts. He had latched on to me for some obsessive reason and I was becoming frightened. I reached out to Dallas Law Enforcement and they weren’t sure where to send obnoxious business person cyberspace complaints. So I channeled Sean Connery and sent M.S. a note from my husband:  “This is Kathy’s husband. Do not connect with her again.” Sandwich in between were the phrases “You piece of crap (no cursing) and “I’ve sent your info to my guys in Dallas.”

M.S. showed complete consciousness of guilt, and deleted him emails. He then forwarded my “guys” email to Linkedin and said he had been threatened. Hours later, my account was suspended. Christy from Linkedin called me to discuss the situation. She said I frightened M.S. and that I could return to Linked in, but only after I promised not to engage him. I told Christy I had no intention of connecting, but I wanted assurances that M.S. would be reprimanded for his behavior.

And then this happened:

“What would I reprimand him for? He didn’t do anything wrong.”

That was when I began my crusade to expose the good ole’ boy playground that Linkedin is and obviously will remain. Here’s the most important part, Linkedin has updated its Terms of Service to include 13 year-old children:

We are updating our User Agreement to make LinkedIn available to students 13 years and older, depending on country. Smart, ambitious students are already thinking about their futures when they step foot into high school – where they want to go to college, what they want to study, where they want to live and work.

THIS IS NOT OK. Time to take ownership of yourself back. You’re being sold and Linkedin’s management and directors are making billions. Now they want to exploit kids.