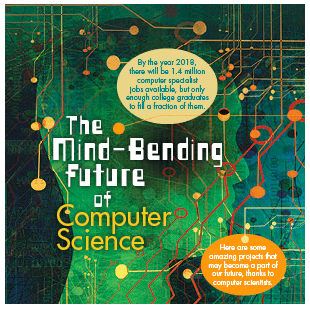 By the year 2018, there will be 1.4 million computer specialist jobs available, but only enough college graduates to fill a fraction of them.

Here are some amazing projects that may become a part of our future, thanks to computer scientists.

By the year 2018, there will be 1.4 million computer specialist jobs available, but only enough college graduates to fill a fraction of them.

Here are some amazing projects that may become a part of our future, thanks to computer scientists.

Or, How to Control Things with Your Mind.

Up until now, the idea of controlling an object with the mind has existed purely in the realm of science fiction. Recently, a team from the Minnesota College of Science and Engineering has managed to direct the movements of a remote controlled quadcopter with the power of thought.

5 subjects (three female, two male) took part in the study
Each was able to control the helicopter quickly and accurately for a sustained period of time.

How it was done:

The entire process is completely noninvasive, requiring no wires, electrodes, or chips to be implanted in the brain.

The user wears an EEG cap fitted with electrodes
The electrodes measure voltage fluctuations resulting from ionic current flows within the neurons of the brain, and then transmit these signals to a computer.
The computer interprets the signals, if they correspond with the recognized signals for movement (Ex. Clenching the right hand, causes the copter to turn right) the computer transmits the signal to the copter.
The copter moves according to the corresponding signal.

All of which takes place in fractions of a second.

FACTOID: In 2011 Stephen Hawking, who suffered from the neurodegenerative disease A.L.S, participated in a trial for a similar system, called the iBrain. He said, “I wish to assist in research, encourage investment in this area, and, most importantly, to offer some future hope to people diagnosed with A.L.S. and other neurodegenerative conditions.”

For decades, Silicon has been the core upon which the computing industry was based. Silicon however has its limitations. The smaller silicon transistors get, the less efficient they become, leaking more and more heat. Researchers have been searching for a replacement for silicon for years now.

FACT (WOW): Tens of thousands of carbon nanotubes can fit into the width of a single human hair.

Used in transistors, carbon nanotubes could improve on silicon’s performance by an order of magnitude.

Within the last 18 months large strides have been made in the field of carbon nanotubes.

What it means: These advances could herald the birth of a whole new generation of carbon-based computing devices.

The prototype computer is relatively simplistic compared to today’s standards, and though it is only capable of running two programs (Sorting and Counting) it is what’s referred to as a “Turing complete” machine, meaning that it is capable of performing any computation given enough time.

At one micron, the transistors used in the Stanford Prototype are gigantic compared to today’s standard of 22nm (nanometer) production. Comparatively, the original transistor constructed by Bell labs in 1947 was built by hand, while 100 million of Intel’s new 22nm tri-gate transistors can fit onto the head of a pin.

As we started with computers the size of a room, so too is this just the beginning.

The life cycle of the average cellphone is around 18 months, at which point they are generally traded in or simply thrown away. Most cellular contracts last 2 years, at the end of which the customer can upgrade to a new phone.

While still just a concept, Phonebloks is an innovative alternative to the

Get a new phone
Wait until phone breaks, or contract is up
Buy new phone….

Business model that has become the standard.

Phoneblok is a customizable phone system made up of a series of “bloks” consisting of the various components that form a cell phone.

This allows the consumer to tailor a phone to their own needs, rather than a stock phone composed of unwanted features.

When a phone breaks, more often than not, a single component is at fault. Yet when this happens, the entire phone is replaced.

FACT: Greenpeace estimates that global e-waste now amounts to between 20 and 50 million tons a year.

What it means: Phonebloks eliminates the need to replace an entire phone due to a single faulty element, and helps lessen the strain on the environment. Should a component break, that blok can simply be detached and replaced individually.

Phonebloks could be the beginning of a whole new generation of mobile communication devices.

Steam is the premier digital distribution platform for video games in the world, and they have a new goal. Bringing the Steam experience, something previously only available on a computer, into the living room.

With that goal in mind, computer scientists knew that a few things were necessary.

Hardware – needing the computing power of a PC, and the functionality and size of a gaming console.
An operating system – A Linux based OS known as SteamOS.
A user interface – Reminiscent of Steam on a computer, yet versatile and usable without a mouse and keyboard.
A controller – Familiar to a console player, and friendly enough to PC gamers more familiar with a mouse and keyboard.

Video game controllers haven’t changed all that drastically since the invention of the now standard, dual thumbstick design.

What it means: The Steam Controller will feature:

A dual trackpad design – Two circular trackpads with haptic feedback, used in lieu of thumbsticks. The trackpads have a secondary purpose, as they are also clickable, serving to replace the more traditional button scheme.
A touchscreen in the center – A secondary touch interface, allowing for a much more versatile approach when compared to standard gamepads.
Customizability – The Steam controller has been designed with the ability to present itself as a mouse and keyboard, presenting the player with a variety of options when deciding on a control scheme, including a configuration tool to customize key-bindings.

Steam is currently accepting applications for their Hardware Beta test. From those applicants they will choose 300, each of whom will receive access to the beta and the shiny new hardware that goes along with it.

PaperTab is the brainchild of Queen’s University’s Human Media Lab, Plastic Logic and Intel Labs. Combining the tangibility of paper, with the versatility and speed of digital, Papertab is being labeled as the world’s first “Paper Tablet PC”

FACT: Unlike current tablets, which switch between apps on a single display, Each Papertab acts as a window for separate applications, all leading to the fact that multiple Papertabs are designed to work together. Tabs can share or send files with a simple tap, or be combined together to form a larger display.

The Papertab has the ability to bend and flex, much like real paper.

The Papertab hasn’t reached the point of being wireless, it is still connected to the Core i5 processor via a data cable leading from the bottom… But all designs have to start somewhere.