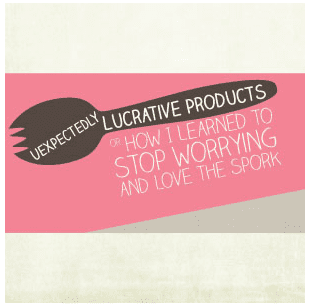 Every day, billions of people go about their lives, doing things like making toast, buying a cup of coffee, or going to the supermarket; while doing so, they use familiar products, things they never give a second thought to. But quite often, these are lucrative products that generate millions of dollar in sales.

What they are: We see them everywhere, every day. On fridges, on desks, and cubicle walls, in books, folders, and occasionally on a sleeping person’s forehead.

Why we use it: Post-it Notes are everywhere, helping millions of people remember anything from mundane tasks, to their own wedding.

A brief history of Post-it Notes

1968: Dr. Spencer Silver, a scientist at 3M (Formerly Minnesota Mining and Manufacturing Company) invented a reusable pressure sensitive adhesive instead of the strong adhesive he was hoping for.

1974: Arthur ‘Art’ Fry, a product development researcher at 3M got the idea to use Silver’s adhesive to securely apply a bookmark into his hymn book.

Later in 1977: Relaunched as “Post-it Notes” it earns more than $2 million within a year.

FACT: The now trademarked Canary Yellow color of Post-it Notes was actually chosen by accident, the research lab next door to the Post-it team only had scraps of yellow paper.

WOW: Post-it® Note weathered a flight from Las Vegas to Minneapolis on the nose of the plane. It endured speeds of 500 mph and temperatures as low as -56 degree Fahrenheit.

What are they: Carboard sleeve that sits around a coffee cup

Why we use it: Because paper cups filled with hot coffee are too hot to hold

A brief history of Java Jackets

1991: A man named Jay Sorensen had just dropped his daughter off at school. While leaving the drive-thru of a local coffee shop, Jay dropped the scalding coffee into his lap because the paper cup was too hot to hold. Instead of suing, Jay got the idea to start a business.

On that day, the Java Jacket was born.

By 1993: After a failed experiment with insulating the cups themselves, he settled on a corrugated cardboard sleeve which would sit around the cup and protect the hand from the temperatures within.

Wow: The company fended off an offer of exclusivity from Starbucks.

2008: The Java Jacket goes Hollywood, under the guise of a “coffee collar,” which is “invented” by actor Patrick Dempsey’s character in the movie Made of Honor. Java Jacket “permitted” use of the idea in the movie.

2013: Almost every cup of coffee you buy is accompanied by a free coffee sleeve of some sort.

Sales: Hundreds of millions of sleeves are sold worldwide by several companies every year. Java Jacket sales figures not available.

What are they: Bags to carry what you buy, from groceries to fashion and household goods.

Why we use it: Easy to carry.

A brief history of the plastic bag:

For centuries: bags have been used to carry purchases.

The business of bags:

FACT: Over 1 trillion plastic bags are used every year worldwide, that’s a million bags every minute.

WOW: 12 million barrels of oil go into the production of the 100 billion bags the U.S. uses annually.

5 cents: cost of each plastic bag to a shopper (price factored in to shopping bill)

What is it: A long, slender spoon with, at the end, having lines like a fork.

Why we use it: Ease of use, flexibility, and it’s cool looking.

A brief history of the spork:

1874: Samuel Francis submitted a patent for a combined fork, spoon and knife.

1970: The name was trademarked in by a U.S. company (the Van Brode Milling Company) and five years later, by a U.K. one (Plastico Ltd.) as a combination plastic eating utensil.

2013: Sporks come in every shape, shade and variety, and can be found the world over, whether they are given out with meals at fast food restaurants, used by backpackers and hikers, or hanging on the walls of eccentric spork collectors. They can cost anywhere from pennies (plastic) to $2 or $3 for a spork made of silver.

FACT: Materials such as stainless steel, silver, aluminum, titanium and polycarbonate plastic have been used in spork manufacture.

WOW: Plastic sporks are common in prisons in the U.S. because they are difficult to form into weapons.

What is it: Flexible, waterproof tape

Why we use it: used to seal things against water

A brief history of Duct tape:

1942: needs of the Army inspired creation of a tape that could be used to seal munitions against water, while strong enough to hold together equipment in need of repair.

Permacell (of the Johnson and Johnson company): nicknamed the tape Duck tape.

1950s: Civilians began to use the new Duct tape and it has become a worldwide product.

Since 1965: Duct tape has been on board every NASA outer space mission

FACT: Duct tape was most famously used by NASA during the Apollo 13 flight, when duct tape helped to seal the makeshift device to remove CO2 from the crippled ship.

The business of Duct Tape

Consumers buy an estimated $100 million of duct tape every year.

The amount of duct tape sold every year could stretch to the moon 1.2 times or wrap around the equator 12.3 times.

Leading manufacturer Henkel sold 873 million yards of its brand of duct tape in 2005.

Why we use it: To keep food products fresh, to keep open bags closed.

A brief history of bread clips and ties:

1952: Bread clips were invented by Floyd G. Paxton and manufactured by the Kwik Lok Corporation.

Shortly after, he invented a machine to rapidly produce a million clips to fill an order.

1939: Invented in 1939 by packaging company T and T Industries Inc and was marketed as “Twist-Ems”.

The business of clips and ties:

Bread clips sell for about $2.15 per thousand.

Twist-ties cost about 80 cents per thousand.