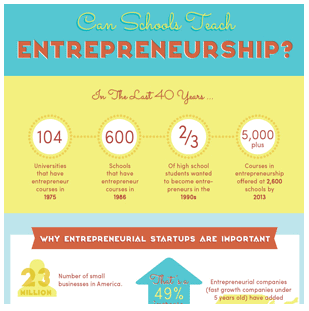 [Yes, and these schools do…]

Why Entrepreneurial Startups are Important:

Entrepreneurial companies (fast growth companies under 5 years old) have added 40 million jobs to the U.S. economy over the past 30 years.

Entrepreneurial Demographics, Do YOU fit the profile?

Still think you have it in you to be an entrepreneur? Here are some facts:
1. The average and median age of company founders when they started their current companies is 40.
2. 95.1 percent earn bachelor’s degrees, and 47 percent have more advanced degrees.
3. Less than 1 percent come from extremely rich or extremely poor backgrounds
4. Majority of the entrepreneurs are serial entrepreneurs.The average number of businesses launched by respondents was approximately 2.3.
5. Entrepreneurs are usually better educated than their parents.

BUT….Can you teach entrepreneurship? [The jury is out]

Yes: You can teach certain skills that will help start up a business. You can be taught:
• Basic business skills
• Finance
• Hiring
• Marketing