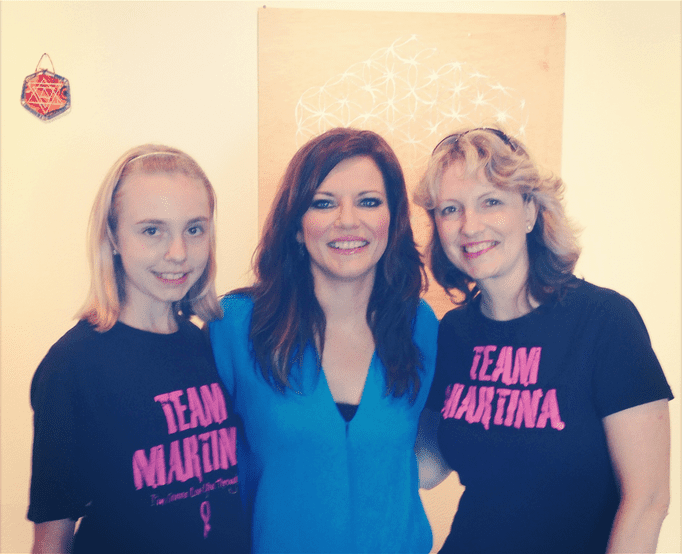 I am a working mom and woman entrepreneur in Alabama and I’ve loved country music since I was a child. And, although I have zero experience and connections in the music industry, I went to Nashville a few years ago and connected with my favorite country music artist of all time, and one of the most famous voices in the world, Martina McBride, to partner with me on an idea that would turn into a global charity phenomenon.

And now I get to go out on tour with Martina around the country and the world using the healing power of music to help people. This year it has taken me everywhere from Guatemala City to New York City.

It’s a dream come true and an unlikely scenario for someone with no music industry experience and it’s what got the attention of CBS “This Morning” news producers recently when they featured us on national TV.

Team Martina was an idea that started 4 years ago this month in August of 2011. Four time Country Music Association Female Vocalist Of The Year and Grammy winner Martina McBride had released a brand new single called “I’m Gonna Love You Through It” – a gripping song that tells the story of one woman’s struggle with breast cancer and how those around her “loved her through” those dark days in cancer treatment.

I had participated in several cancer fundraising walks leading up to this and decided to create a team for Martina McBride fans wishing to participate in a breast cancer walk in Nashville, TN, in celebration of this special song. Little did I know that walkers would come to Nashville from 8 or 10 different states to participate in the walk with us and fund-raise over $20,000 to help the American Cancer Society.

And so “Team Martina” was born around one song.

In the time since we first started, Team Martina has attracted thousands of country music fans from around the nation and the world to join Martina McBride in volunteering alongside her at hospitals, food banks and shelters in the towns out on her tour, and on do-good projects in their own home towns. Having raised more than $300,000 for good causes, we started a breast cancer research grant at Vanderbilt Ingram Cancer Center in Nashville, TN, and a therapeutic music program for orphaned children at Covenant House shelter in Guatemala.

We found out that the concept of “loving someone through it” was applicable to so many needs in the world from hunger to homelessness. And we found out that music can be a very powerful catalyst to unite people in making a difference.

Martina offered me a brand new job and career working with her to develop this unique charitable endeavor where she not only makes a difference in the world with her music but also empowers and encourages her fans to make a difference as well.

That’s right… a song started it all and one simple idea that I had to help people led me to an entirely new way of life, a new business idea and my dream job working with a country music legend. Dreams do come true.

Here are 5 simple ideas that helped me turn a dream into a successful new business:

Sheila Jones is a 43 year old mother of one and a perpetually positive dreamer and entrepreneur. She is the Executive Director of country music star Martina McBride’s charity organization, Team Martina. When not on the road on tour with McBride, she can be found fundraising and organizing teams of country music loving volunteers to descend on food banks, hospitals, shelters and 5K walks around the country to help people in need – all inspired by a song. She blogs at http://teammartina11.tumblr.com.

Find out more about Team Martina by visiting http://www.TeamMartina.com