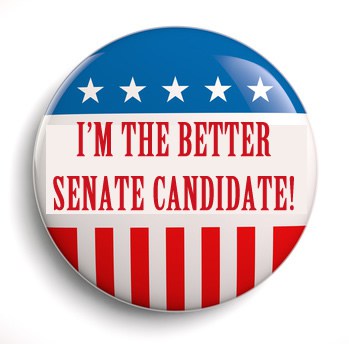 I’m Running For Senator, Can I Count on Your Support? by @1000Girlfriends

I was just formulating this thought: ‘Hey, I’m going to run for U.S. Senate.” I haven’t fully thought it through at all, so I figure I’ll fit right in with the politicians on the Hill. I’m going to run as Independent and when I win, I’m going to remain independent. I will never let on what my vote will be. I will find ways to filibuster the filibusters using pens that click or screaming out “atta boys” at Ted Cruz and Rand Paul. I will go into caucus meetings that I don’t belong to and say “I’m thinking of joining,” like it’s a gym membership. Every day the Senate is in session, I will incorporate at least five businesses from my state of Georgia into my comments, “I’m on my way to the UPS office, but I think I’ll stop and get a Coca-Cola at The Home Depot.  I need to catch a Delta flight in two hours; can’t wait to get a Chick-fil-A on the way home, hashtag Georgia!”

When I’m Senator, I’m going to respect the office of the President even when I don’t agree with her, because the President is, for better or for worse, America. I will use my time on the floor to deliver speeches from the people of my state, unedited, and once a week I will do a Youtube show and read tweets sent to me from Americans, even the bad ones. I will refuse to meet with lobbyists, people paid to eloquently deliver their message. Instead, I will appoint five random constituents to meet with the special interest groups and the constituents will have to be sold on a product or service.

When I’m Senator, I will propose cutting our pay from $174,000 a year to the U.S. median income of $53,000 for a family (but my trips to Washington will be paid for by my state). More importantly, I will honor the veterans and ensure that their healthcare is far superior than any that is offered, especially to us. I will always make time for a veteran and the first bill I will sponsor is the “Children of Fallen Patriots Act” which will send the children of a Fallen Hero to a military or state educational institution at no charge.

Lastly, I’m going to honor the Constitution and when questions arise, I will have historical facts to provide insight into our forefathers motivations. For instance, our forefathers could not have conceived of assault weapons when they crafted the Second Amendment or Internet cookies when they wrote the Fourth Amendment – GOOGLE STOP WATCHING ME!

I hope I can count on your support in November 2016.