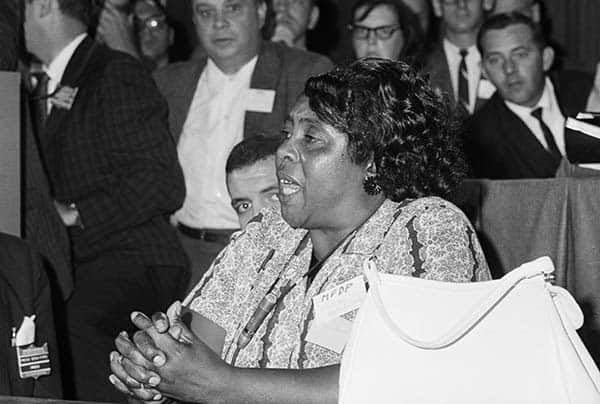 Fifty years ago, Fannie Lou Hamer took center stage at the Democratic National Convention in Atlantic City. As founder of ‘Me and My 1000 Girlfriends, That’s Who!’ I am partial to the stories of our Girlfriends who changed the world without a degree from Harvard or a position at Google, both incredible accomplishments and worthy of praise, but when I consider the struggle that African American women endured during the Civil rights era, nothing pains my heart more than how our sisters were terrorized, beaten and even killed as they set out to chane. U.S.

Today, there are women who have earned their way into congressional seats and they are the first to say that there are not enough women in Washington, but not one of the current Congresswomen or female Senators has endorsed another woman running for office unless she is an incumbent or of course, unless she is Hillary Clinton.

Why? I was told because they are afraid they will lose their own seat or their donors. Democratic National Committee Chair Debbie Wasserman Schultz should be endorsing every single woman running on her party’s ticket and yet when her friend Florida Gubernatorial candidate Nan Rich ran in Florida, she said nothing.

Fannie Lou Hamer wasn’t afraid to do what was right, even after she was beaten and left for dead by Mississippi police who stopped the bus that she and other members of the Mississippi Freedom Democratic Party (MFDP) were traveling on because they said it was the wrong color. Hamer wasn’t deterred when 221-year-old black Mississippian, James Chaney, and two white New Yorkers, Andrew Goodman, 20, and Michael Schwerner, 24—were murdered near Philadelphia, on June 21, 1964 during Freedom Summer. She was fearless standing at the Democratic National Convention and when it was considered a compromise to give the MFDP two non-voting seats, Hamer famously,  “We didn’t come all this way for no two seats, ’cause all of us is tired.” Freedom Summer was a campaign in 1964 set up to register as many African American voters as possible in Mississippi. Yes, only Mississippi. When Hamer and others showed up to be seated as the MFDP at the 1964 Democratic National Convention, the world was watching. The Civil Rights Act had barely passed in July with great opposition. Johnson had to ensure he was behind the legislation he pushed to a vote.

The credentialing committee asked to hear from the MFDP and planned to televise Hamer, and Johnson was afraid she would hand the presidency to Goldwater who had voted against the Civil Rights Act claiming “You can’t legislate morality.”

Here is the transcript of her speech. You can listen here: Watch it here.

Mr. Chairman, and to the Credentials Committee, my name is Mrs. Fannie Lou Hamer, and I live at 626 East Lafayette Street, Ruleville, Mississippi, Sunflower County, the home of Senator James O. Eastland, and Senator Stennis.

It was the 31st of August in 1962 that eighteen of us traveled twenty-six miles to the county courthouse in Indianola to try to register to become first-class citizens.

We was met in Indianola by policemen, Highway Patrolmen, and they only allowed two of us in to take the literacy test at the time. After we had taken this test and started back to Ruleville, we was held up by the City Police and the State Highway Patrolmen and carried back to Indianola where the bus driver was charged that day with driving a bus the wrong color.

After we paid the fine among us, we continued on to Ruleville, and Reverend Jeff Sunny carried me four miles in the rural area where I had worked as a timekeeper and sharecropper for eighteen years. I was met there by my children, who told me that the plantation owner was angry because I had gone down to try to register.

I had to leave that same night.

On the 10th of September 1962, sixteen bullets was fired into the home of Mr. and Mrs. Robert Tucker for me. That same night two girls were shot in Ruleville, Mississippi. Also Mr. Joe McDonald’s house was shot in.

The four people that had gone in to use the restaurant was ordered out. During this time I was on the bus. But when I looked through the window and saw they had rushed out I got off of the bus to see what had happened. And one of the ladies said, “It was a State Highway Patrolman and a Chief of Police ordered us out.”

As soon as I was seated on the bus, I saw when they began to get the five people in a highway patrolman’s car. I stepped off of the bus to see what was happening and somebody screamed from the car that the five workers was in and said, “Get that one there.” When I went to get in the car, when the man told me I was under arrest, he kicked me.

I was carried to the county jail and put in the booking room. They left some of the people in the booking room and began to place us in cells. I was placed in a cell with a young woman called Miss Ivesta Simpson. After I was placed in the cell I began to hear sounds of licks and screams, I could hear the sounds of licks and horrible screams. And I could hear somebody say, “Can you say, ‘yes, sir,’ nigger? Can you say ‘yes, sir’?”

And they would say other horrible names.

She said, “I don’t know you well enough.”

They beat her, I don’t know how long. And after a while she began to pray, and asked God to have mercy on those people.

And it wasn’t too long before three white men came to my cell. One of these men was a State Highway Patrolman and he asked me where I was from. I told him Ruleville and he said, “We are going to check this.”

They left my cell and it wasn’t too long before they came back. He said, “You are from Ruleville all right,” and he used a curse word. And he said, “We are going to make you wish you was dead.”

I was carried out of that cell into another cell where they had two Negro prisoners. The State Highway Patrolmen ordered the first Negro to take the blackjack.

The first Negro prisoner ordered me, by orders from the State Highway Patrolman, for me to lay down on a bunk bed on my face.

I laid on my face and the first Negro began to beat. I was beat by the first Negro until he was exhausted. I was holding my hands behind me at that time on my left side, because I suffered from polio when I was six years old.

After the first Negro had beat until he was exhausted, the State Highway Patrolman ordered the second Negro to take the blackjack.

The second Negro began to beat and I began to work my feet, and the State Highway Patrolman ordered the first Negro who had beat me to sit on my feet – to keep me from working my feet. I began to scream and one white man got up and began to beat me in my head and tell me to hush.

I was in jail when Medgar Evers was murdered.

All of this is on account of we want to register, to become first-class citizens. And if the Freedom Democratic Party is not seated now, I question America. Is this America, the land of the free and the home of the brave, where we have to sleep with our telephones off the hooks because our lives be threatened daily, because we want to live as decent human beings, in America?

Johnson was so afraid of Hamer’s impact, he broke into her speech with a Special Announcement. He remarked on the nine month anniversary of the shooting of JFK and Connolly. Her speech did move many Americans who called the White House asking that the MFDP be seated. Eventually, they received two voting seats, not a victory. On December 20, 1964, she spoke alongside Malcolm X and delivered the famous line, “And I’ve been tired so long, now I am sick and tired of being sick and tired, and we want a change. ”  Hamer would be an official delegate in 1968. In 1971, she helped to found the National Women’s Political Caucus, serving as the commencement speaker. Today, if you go to NWPC.org and search “Fannie Lou Hamer,” this is what comes up: 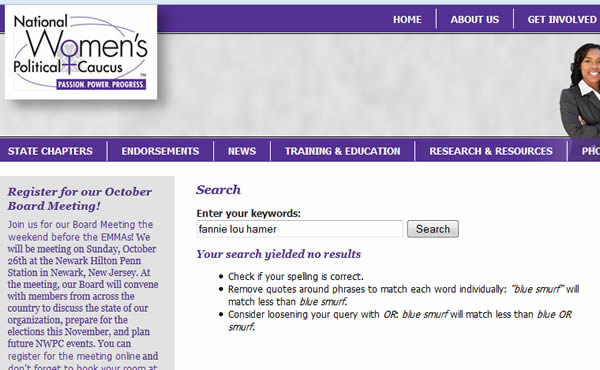 If you look above above left, nothing is posted about Hamer’s birthday and not even her speech from the commencement of the National Women’s Political Caucus or the founding members or anywhere on the site. I propose on Oct. 6, 2014, Fannie Lou Hamer’s birthday, we spend the day blanketing social media about Fannie Lou Hamer. #FannieLouHamerDay – You can tag @hamer_lou – The Fannie Lou Hamer Institute of Advocacy & Social Action.