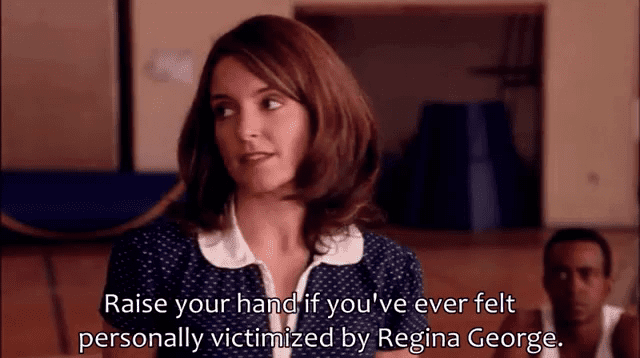 Girl on girl crime isn’t simply something to laugh at from Mean Girls. It’s unfortunately very, very real. Recently, a female ‘friend’ of mine spun a connection I helped facilitate. The focus was when I connected them, the lack of diversity and women in a local organization, and her spin not only distracted from the problem, it proposed a solution that was very much in ideation. Her reasoning when confronted?

‘I couldn’t lose my relationship with [insert problematic organization].’

This is the same problematic organization whose owner asked (after I had rented space there for a two years at $150 – $300 a month) if I really owned my business, if people worked with me or I was still in ideation, if I hired a ghostwriter for the book I had just published, and if I had actually started my business – all in front of other business people and potential clients.

All by the same guy who had put other women in awkward and uncomfortable positions.

The same problem this friend and I were fighting to fix in the community.

Before this goes too far down the rabbit hole, this isn’t about that organization and its practices. This is about the girl on girl crime that happened and continues to happen.

A few things cause girl on girl crime – it’s important to note it’s not always a malicious event. The above event wasn’t malicious; it was survival. After feeling incredibly angry for a few days, I now feel sorry for my friend. She felt like she couldn’t be openly critical of this organization – she felt as though she needed them. Sometimes though, it isn’t simply survival. We have these ugly notions that success is finite, that we need to compete to WIN and we need to ‘hustle harder’ and ‘be ruthless’ and ‘claw that ladder’.

We are truly stronger together. And it’s not realized by simply saying it. You have to DO IT.

On the heels of coaching 100 Women for 100 Hours, I’ve been thinking a lot about how we support one another as women, and how we can stop girl on girl crime. Here are three simple ways you can stop contributing to the problem, and start actively uplifting one another:

What if YOU contribute to the rise of women instead of taking part of girl on girl crime?

Jen Brown (Oleniczak) is the Founder and Artistic Director of The Engaging Educator. Through EE, her pedagogical approach of Improv as Continuing Education has reached over 25,000 people – all non-actors! Since 2012, Jen has given three TEDx Talks on the power of Improv, grown EE to three locations in NYC, Winston-Salem, NC and LA, and recently began The Engaging Educator Foundation, a 501(c)(3) which offers free and low-cost Improv workshops for educators, at-risk adults, teens and students on the Autism Spectrum. Jen holds degrees and accreditation from Marquette University, City College of New York, St. Joseph’s University and Second City. Currently, Jen happily resides in Winston-Salem with her husband, who she met while teaching an improv class – and no, he wasn’t the best person in the class, in fact, he was the worst.

www.theengagingeducator.com
« 7 Helpful Keys To A Successful Relationship by @KiaraRoseWade1
Content Marketing 101: Create a Strategy in 3 Steps by @DrRKayGreen »