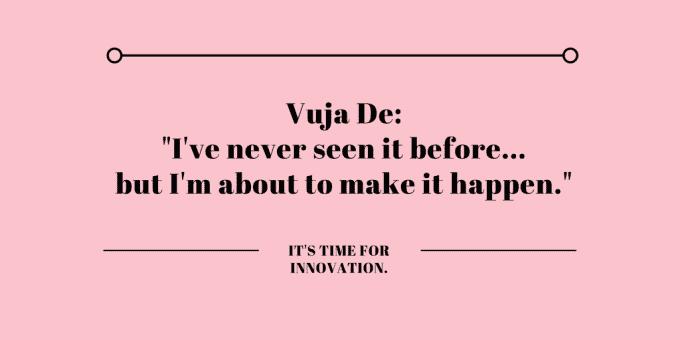 Let’s all take a moment to think about Vuja De.

What is this magical new thing, you might ask? Let me tell you! Vuja De is defined by Simon T. Bailey as a moment when you say to yourself, “I’ve never seen this before,” but you intend to create it anyway.

History is rife with examples of women who looked at what was happening around them and felt a Vuja De moment. The “default” experience of the world over the past few millennia has been one of patriarchy, and men in positions of influence and power. Women stayed at home.

Imagine the leap, not only of faith but of power and perseverance, it takes for a woman to look at a career held by men for thousands of years and say to herself, “I ought to be doing that.”

The Reverend Rose Hudson-Wilkin, for example, is the first woman to serve as chaplain to the British Speaker of the House of Commons. There were 78 male chaplains who came before her; what would make this woman believe that this was something she could (and should) aspire to?

It’s my great vocation in life to make the case that Vuja De is, on a meta-level, the story of who is running the world’s innovation: women. Any individual is capable of creating amazing things, regardless of gender or class or background. Women, however, are deeply equipped to see the world around them and imagine something profoundly different.

Consider the example of Margaret Sanger, the inventor of the Pill. Whatever your stance on contraception, it’s pretty hard to deny that offering women control over their own reproductive choices opened literally thousands of doors into an active role in society.

As a writer, I’ve decided that my next book will be on this topic. To that end, I’d like to encourage all of you to help out with lots of secondary sources. I want to crowdsource ideas from this community! Who does the idea of Vuja De remind you of? What are their accomplishments? How many lives has their work affected? What inspires you about them? They can be historical or contemporary figures, singular women or groups of women (and definitely women that engaged in this work in concert with men).

I hope that this book explores the idea of women forging a completely new path through familiar territory. We’re not just taking jobs outside the home but completely reshaping the way we think of and do economics (and by extension, society and politics).

Let’s get into the minds of women like Alice Paul (who proposed the first Equal Rights Amendment in 1923), Frances Perkins (FDR’s Secretary of Labor, 1933-45), jurist Sandra Day O’Connor, politicians Barbara Jordan and Shirley Chisholm, mathematician Ada Lovelace and her intellectual heir Maryam Mirzakhani, and countless women entrepreneurs (like all of YOU).

You are the ones who daily continue this tradition of seeing the default world and imagining something profoundly different. Let’s ensure that future generations will never doubt where we stood on this!

Hillary Strobel is a single mother, fierce learner and teacher, ardent lover of life, and the ass-kickin’ President and CEO of The Flyways, Inc. We publish story projects that are interactive and highly creative, and 25% of profits are donated to support social justice causes: from business incubators serving vulnerable women, to agencies working to reduce recidivism rates.Hillary also runs a consultancy for businesses and organizations seeking to meaningfully build social impact programs from the ground up. The three pillars that support this mission are: designing outcomes and developing goals, measuring impact and creating a universal metric, and quantifying results to the public.After a long and varied career in just about every kind of Liberal Arts field imaginable, and in every type of job — volunteer, employee, entrepreneur, non-profit worker, and freelancer — Hillary has decided to marry her two deepest passions: storytelling and social justice. The results have surpassed her wildest expectations.