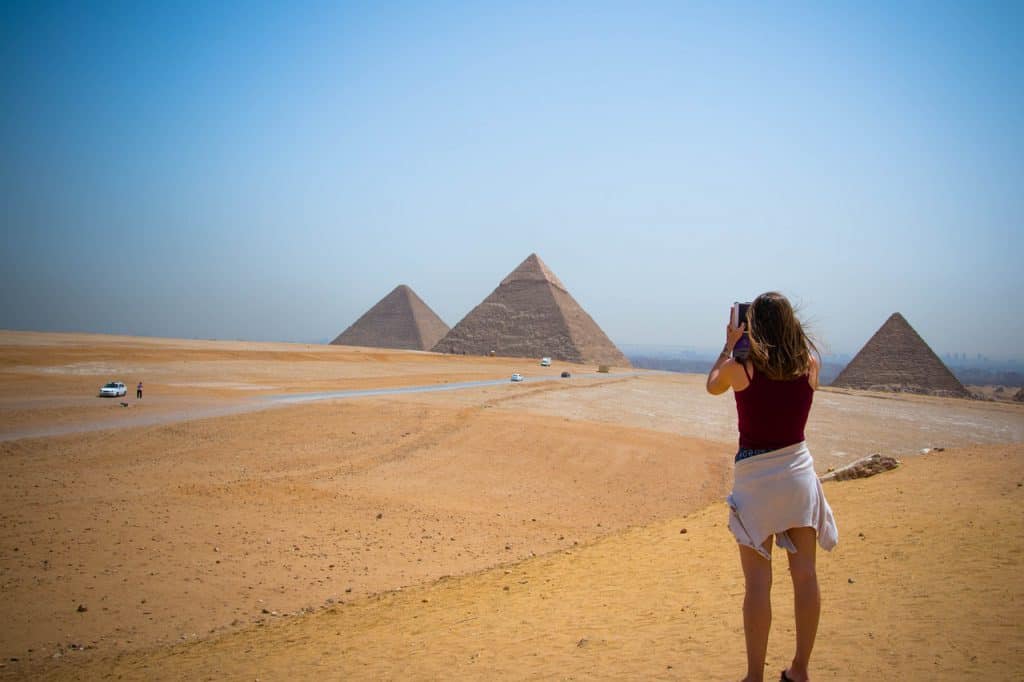 This week a dream came true for me.

I ticked a BIG item off my bucket list by visiting the Pyramids of Egypt. The last remaining wonder of the ancient world.

To say it was a sight to behold is an understatement.

As the bus turned the corner and two of the Pyramids came into view, they took my breath away and when we got off the bus and I was standing in front of them, I felt myself get a little choked up.

The scale, the structure, the history, the magnificence, the anticipation, the early start and the 7-hour bus trip to get there from the part of Egypt we were staying in just became a little too much in that moment.

It felt extra special, because not only had I ticked off a bucket list item, it was also business as usual as I presented my weekly Livestream for my Facebook Community from right by the Pyramids!!

It felt surreal and incredible and whilst I was doing the Livestream, I was reminded how both starting my business and going to Egypt had seemed like such a big deal for such a long while.

But when it came to it, it was very straightforward. I decided and booked the trip on Tuesday and by Thursday evening I was in Egypt. Not such a big deal.

I wasn’t so quick in starting my business which I had procrastinated over for years but frequently find myself wishing I had started sooner.

Here are 3 things the Egyptian Pyramids Taught Me About Business

Staring at those huge stone blocks arranged neatly in the hot desert showed me the possibility of what can be achieved with time, vision and focus.

To think that these were transported, organised, lifted and moved into place at a time when there were scarce resources showed the ingenuity of the Egyptians to transcend the limits of what’s possible.

Likewise, if you had said to me a few years ago when I was feeling stuck in my corporate job, that I would be standing in the desert live streaming to my community thanks to the wonders of modern technology, I wouldn’t have believed you.

Thinking big can often give way to being realistic but there is great magic in being open to possibilities.

What would you do if you believed anything was possible?

To create something amazing may take time

The pyramids took 20 years to build and it is estimated that involved installing 800 tonnes of stones every single day.

That is some serious hard graft involved – but I am sure you can agree that the results are pretty spectacular?

Whereas timescales may vary, building your business, will also take time. As you lay your foundations, build and grow it will require that consistent daily effort to build something that you are proud of.

And whilst that might not sound sexy, keeping the big vision in mind, that metaphorical last stone of the pyramid, will keep you going.

Business (or bucket lists) don’t have to wait for “someday”

The Pyramids and starting a business were two of the things that were on my “someday” list. I would do it “someday” but never had a firm or definitive plan in getting there. They were to be done when the time was right.

But the reality is someday doesn’t arrive.

And just like The Pyramids felt like a big deal beforehand, so did starting my business before I took the leap. But when I had done it, I kind of wondered what had taken me so long!

So, if you’re waiting for someday to do that thing that you’ve always wanted to do I just want to give you a little nudge and a reminder that now is as good a time as any.

Ask yourself what I can do today to make progress on this?

And then go lay that first block.

Tasmin said goodbye to the corporate world after fifteen years in the legal and recruitment sectors, before starting her own entrepreneurial journey. She found her passion as a Mindset and Business Confidence Coach and specialises in helping women navigate the transition from the 9-5, to their own business based on their own passions. She helps them overcome the fears, limiting beliefs and mindset blocks getting in the way of them pursuing their dreams. She loves to travel, fitness and curling up with a good book.

For more information, visit www.tasminsabar.com and download the Free Ultimate Confidence Toolkit to help ramp up your confidence so that you can start your dream business without fear. Join her Facebook community for aspiring Entrepreneurs. Connect with @tasminsabar on twitter or Facebook.

www.tasminsabar.com/
« What Is True Greatness? by @timewithtammy
Four Reasons Slowing Down Can Benefit Your Mind And Your Business by @vmcntosh »